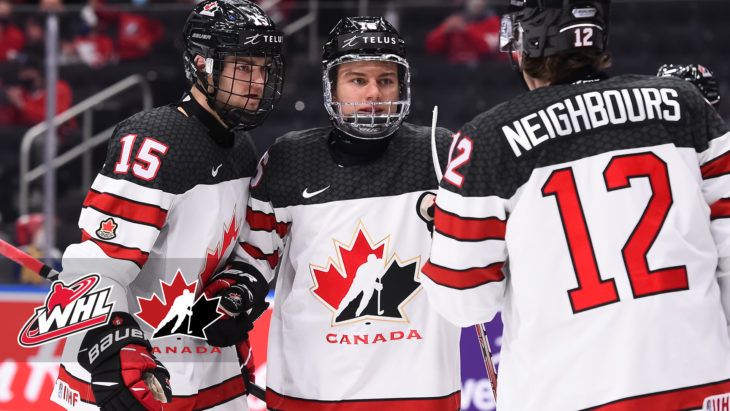 Edmonton, Alta. – Connor Bedard made history on Tuesday at the 2022 IIHF World Junior Championship, registering four goals to lead Canada to an 11-2 victory over Austria.

Bedard, the Regina Pats phenom, became the first 16-year-old player to register a hat trick for Canada at the World Junior Championship since Wayne Gretzky did it way back on Christmas Day in 1977 against Czechoslovakia. He also became the youngest player in World Juniors history to score four goals, setting a World Juniors single-game goal scoring record at the same time.

The reigning WHL Rookie of the Year scored his first goal of the tournament with 4:58 to play in the first period, cashing in on his own rebound with Austria down a man. He followed up 1:11 later with his second of the evening, forcing a turnover in the neutral zone before wheeling in two-on-one with Will Cuylle (OHL Windsor) and converting to make it 5-0 for Canada after 20 minutes of play.

Midway through the second period, the product of North Vancouver circled atop the offensive zone before driving the slot and wiring a hot shot high glove side past Austrian netminder Leon Sommer to give Canada a commanding 6-0 advantage.

Chalk this up under “THINGS WE LOVE TO SEE.” 🎩🎩🎩@WHLPats | #WorldJuniors https://t.co/UeeHqT3rJa

During the third period, Bedard redirected a shot past Sommer, securing World Juniors history in the process.

Bedard wasn’t the only WHL player to make his presence known on Tuesday night.

Making his World Juniors debut, Kamloops Blazers forward Logan Stankoven showed off his NHL-calibre release during the first period of play, giving Canada a 3-0 lead 8:22 into the proceedings.

By the time the final buzzer sounded, the names of WHL players were scattered across the scoresheet, including Ronan Seeley (2A), Kaiden Guhle (1A), Dylan Guenther (2A), Jake Neighbours (1A) and Ridly Greig (1A).

Next up, Canada will face Germany on Wednesday, December 29 at 5 p.m. MT.

Connor Bedard became the youngest player at the #WorldJuniors to score four goals in one game Tuesday night! 🇨🇦 pic.twitter.com/CXuFl5FgFq