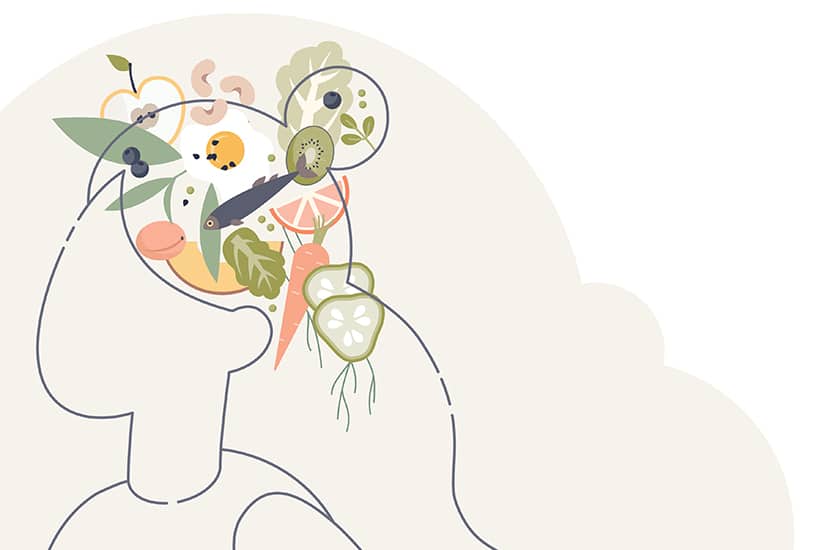 With so much emphasis put on how the food we eat affects a person’s physique and energy level, it’s important not to lose sight of how it can also affect one’s state of mind.

Here, we explore the link between food and mental health, and how the digestive process directly influences your mood.

Having lived through a global pandemic, it’s safe to say it’s been a tough year and a half for most Canadians. Anxiety, loneliness and social isolation, uncertainty, fear of the virus, online learning, job loss and financial stress as a result of lockdowns have all wreaked havoc on our mental health. A poll conducted by Mental Health Research Canada in June 2021 indicated that 24 percent of Canadians reported self­rated high levels of anxiety, and 16 percent reported self­rated high levels of depression, compared with 8 percent and 7 percent, respectively, before the COVID­19 outbreak.

While psychotherapy and medication are the primary interventions for mental health conditions like anxiety and depression, what we eat can also have a major impact. In fact, diet is the number one modifiable lifestyle factor to help decrease the risk of depression. A meta­analysis of 11 studies containing a total of 101,950 participants showed that an unhealthy diet can actually increase the likelihood of developing depression by 40 percent. Unfortunately, diet is not often discussed as a tool in the treatment and prevention of mental illness, mood disorders or cognitive decline. Increasingly, though, science is uncovering the link between diet and mental health, and providing evidence to support the use of dietary interventions. As a result, nutritional psychiatry is an emerging area of research that looks specifically at the role of nutrition in the development and treatment of mental illness.

The landmark 2017 SMILES Trial was a random­ized controlled trial (the gold standard of scientific research) that looked at people with major depres­sion. During the 12­week study, participants were randomly placed into two groups, and received either social support or nutrition counselling to follow a Mediterranean­style diet. The Mediterranean diet is high in vegetables, fruits, whole grains, legumes (lentils, beans, peas), nuts, sources of healthy fats including olive oil, fish and seafood, includes small amounts of poultry, meat and cheese, and is low in sugar and processed foods like pop, baked goods, fast food, deli meats, processed snacks and the like.

Depression scores were taken down at both the beginning and the end of the 12­week intervention. Both groups saw improvement in their symptoms, but the group that received nutrition counselling had significant improvement in their symptoms and, in fact, in 25 percent of the parti­cipants, symptoms were lessened to the point that they were no longer classi­fied as severely depressed. This was the first study to show evidence that diet has a significant impact on symptoms of depression.

The 2019 HELFIMED Study found similar results. In this study, half the participants followed the Medi­ terranean diet and took a daily omega­3 supplement, while the rest participated in a social support group. At the end of three months, both groups saw improve­ment in their depression scores, but the diet group had substantially greater improvements in symptoms, so much so that the average depression score in this group no longer met the criteria for extremely severe. Plus, these improvements to the participants’ symp­ toms were sustained three months after the intervention period ended.

How does what we eat affect our brain?

The composition, structure and optimal functioning of the brain are all dependent on the proper nutrients being available in the body. To start, the foods we eat actually become our brain cells. The brain is mostly made up of essential fatty acids, which we must get from our diet in the form of omega­3 and omega­6 fatty acids. Omega­3 is found primarily in fatty fish, while omega­6 is found primarily in vegetable oils. The typical North American diet—which includes plenty of processed foods containing high levels of vege­ table oils—has more than enough omega­6, but is often deficient in omega­3, resulting in an unbalanced ratio of these two essential fatty acids. The problem is that omega­6 has pro­ inflammatory properties, while omega­3 has anti­ inflammatory properties. For this reason, getting enough omega­3 and limiting highly processed foods is essential for the health of the brain.

To get enough omega­3, the best strategy is to eat at least two servings of fatty fish (salmon, trout, mackerel, sardines or her­ ring) each week. Other strategies include cooking with olive or canola oil, using extra­virgin olive, flaxseed or walnut oil for salads and uncooked appli­ cations, and eating plenty of chia seeds, hemp hearts, walnuts and/or ground flax­ seeds. According to Statis­ tics Canada, only 15 percent of Canadians consume fish at least twice a week, one or more servings of which are a fatty fish. A food­first approach is always best, but if you don’t eat two servings of fatty fish per week, take a daily omega­3 supplement. For youth and adults who suffer from depression or other mental health conditions, experts recommend taking 1,000 to 2,000 milligrams per day of eicosapentaenoic acid (EPA), a type of omega­3 fatty acid. Look for a supplement with a 2:1 ratio of EPA:DHA (mean­ ing it contains twice as much eicosapentaenoic acid as it does docosa­ hexaenoic acid, or DHA, another type of omega­3 fatty acid). Healthy indivi­ duals should take 250 milligrams of EPA a day.

Furthermore, the brain is prone to oxidative damage, which is linked to neuro­ degenerative disorders, such as Alzheimer’s dis­ ease and other memory disorders, as well as mental disorders like depression, anxiety, schizophrenia and bipolar. Antioxidants pro­tect our cells from oxida­tive damage caused by free radicals. Colourful vegeta­bles and fruits are rich in antioxidants, such as vita­ min C, polyphenols and fla­vonoids. Fill half your plate with vegetables and fruit at each meal. Aim to eat at least 5 servings a day. Vitamin D is also a key nutrient for brain develop­ment and mental health. A 2013 systematic review and meta­analysis found that lower vitamin D levels were found in people with depression compared with a control group. A whop­ping 90 percent of Cana­dian adults who don’t take a vitamin D supplement are deficient in this nutrient. Salmon, tuna, sardines, and fortified dairy products are good sources of vitamin D. Our body naturally manu­factures vitamin D when our skin is exposed to sun­ light; however, in northern countries like Canada most people aren’t exposed to the sun enough to obtain the recommended levels. The recommended dietary allowance of vitamin D for children and adults under 70 years is 600 IU a day, and for adults over 70 is 800 IU. The amount to sup­plement varies based on how much you get from your diet, your skin colour, age, body size and your exposure to sunlight, so 600 to 800 IU is a general recommendation, but some people may need to take up to 2,000 IU (but be sure to stay below the tolerable upper limit of 4,000 IU).

The microbiome and the gut-brain axis.

Healthy bacteria that live inside our intestines make up an ecosystem called the gut microbiome. A diverse microbiome is beneficial to our mental health. A communication pathway between the gut and the brain, called the gut-brain axis, connects the central nervous system and the gastrointestinal tract and controls many functions in the body. Bacteria in the gut produce neurotransmitters, and these neurotransmitters play a key role in this communication pro- cess. For example, an estimated 95 percent of serotonin, a key neurotransmitter linked to mood, wellbeing and happiness, as well as sleep regulation and appetite, is made by the bacteria in our gut. These beneficial bacteria are also shown to decrease inflammation, improve how well we absorb nutrients from food and to play a role in immune function.

The composition of our microbiome varies due to multiple factors, but one key determinant is diet. Prebiotics function as the “food source” for beneficial bacteria, and promote microbial growth and activity, thereby supporting mental health. However, the average North American diet is low in foods like vegetables, fruits, whole grains and fibre that support a healthy microbiome, and is typically high in refined grains, sugar and highly processed foods. Fermented foods (such as kimchi, kombucha, yogurt, miso) themselves contain healthy, live bacteria, called probiotics, that can help increase the number and diversity of good bacteria, and, therefore, can play a role in helping support mental health. Probiotic supplements, specifically ones that contain the bacterial strains Lactobacillus and Bifidobacterium, may also contribute to creating a healthy microbiome, and good mental health.

What to Eat for Better Mental Health

To boil it down, here are 6 key takeaways: