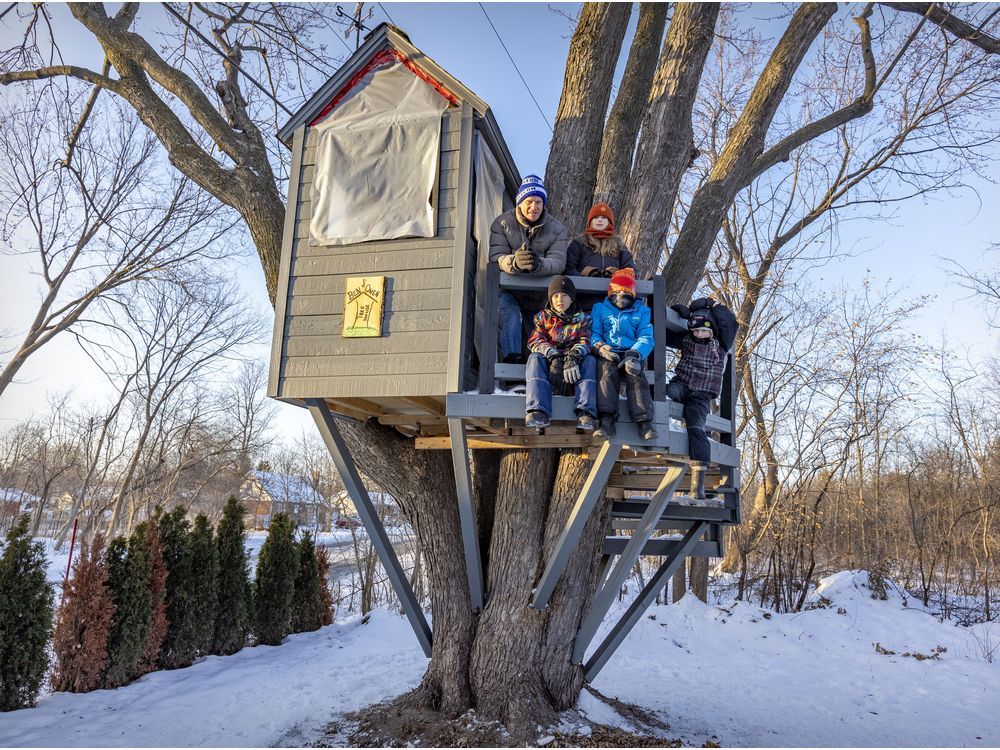 Peter Ducree spent the summer months building a backyard tree house for neighbourhood youngsters to play in during the pandemic.

While the treehouse is a hit with the kids, city officials recently informed the 75-year-old Pointe-Claire resident by letter that the tree house encroaches on city territory and has to be removed by Jan. 22, or he’ll face fines.

Ducree, a retired Bell employee who lives on Summerhill Ave. in Valois, hopes the tree house can remain intact as it has become a popular fixture for local kids seeking outdoor activities to break the stifling boredom of the pandemic.

He said the 4-by-8-foot tree house was a “labour of love.” He installed it about seven feet above ground in a giant maple tree that borders Ponner Ave., next to Ponner Woods.

What upsets Ducree the most is that he approached city officials before he started building to see if he needed a permit. He was told a permit was not required. “My mistake is that I didn’t get that in writing,” he said.

He said city inspectors came by a couple of times after he finished the project. On Dec. 15, local public security informed him that because 30 per cent of the roots at the base of the tree were on city property, the tree house poses a potential liability to the city.

Ducree argued the tree house was on private land, but a city arborist came with a certificate of  location. “They measured from the cement curb (on the street) to the base of the tree. The base is about five feet in diameter, and 30 per cent of it is on the city side and the rest is on the private side. But when the tree was planted it was on private land and it grew bigger.”

Ducree said it is impossible to modify the structure now without removing it and rebuilding it from scratch.

He said public security had to be aware of the project because they often passed by while he was working on it. He wished they had said something to him earlier so he could have addressed any irregularities.

He contacted his local councillor, Kelly Thorstad-Cullen, to see if a  compromise could be reached with the city.

A spokesperson for the city told the Montreal Gazetted the tree house file is currently under review.

Ducree says he built a quality tree house made of plywood and cedar, and equipped with a staircase ladder. Even the grey siding matches his house.

“I most definitely ‘overbuilt’ this treehouse,”  he said in a Facebook post. “In fact my neighbours would tell me there are some home extensions that were completed with less care and concern for longevity and safety.

“People going by would sometimes joke to me that they wanted to rent a room up there.”

Ducree, the father of two adult children, has the support of some neighbours and their children who play in the structure.

Jennifer Leblanc, who also lives on Summerhill, said the tree house has been a source of pleasure for her children  — Ben, 8 and Owen, 6,  — during the pandemic and she’d be sad to see it removed.

“I think he should be allowed to keep it. It’s not harming anyone and it’s giving a lot of joy to the community. All the kids came to play here in the summertime. It gives everybody something to do.”

She said the pandemic has been a killjoy for confined kids.

“They haven’t been allowed to do anything. Now they’re doing online learning at school. Yesterday,  after being on the computer for five hours, my boys came outside and played in the tree fort.”

“I don’t know if the city can compromise based on the existing rules,” Williams said. “I guess they would have to bend or change the rules.”

“Peter worked on it all summer long,” added Leblanc. “And it’s not hurting anybody. It’s bringing the community together.”

Sign up to receive daily headline news from the Montreal Gazette, a division of Postmedia Network Inc.

The next issue of Montreal Gazette Headline News will soon be in your inbox.