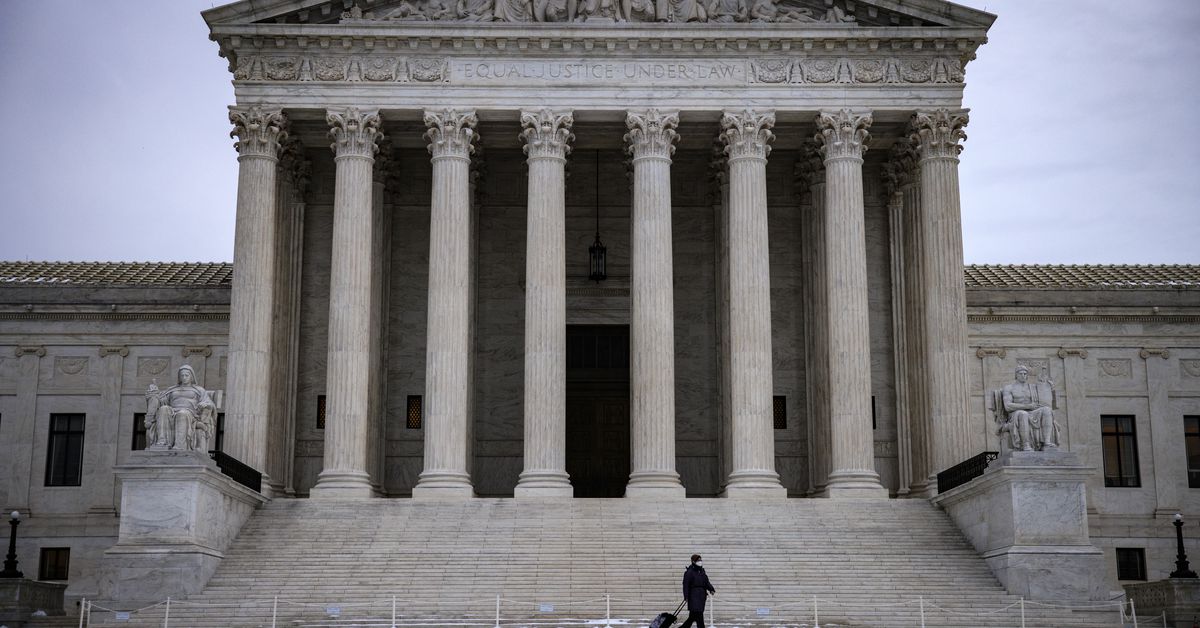 Benjamin Flowers is Ohio’s solicitor general, and he was supposed to be at the Supreme Court on Friday to ask the justices to nullify a Biden administration rule requiring most workers to either be vaccinated against Covid-19 or to be regularly tested for the disease.

But Flowers had to argue his case over the phone. The reason why? He himself has Covid, and therefore could not enter the justices’ workplace and risk endangering them and their staff.

It’s an elegant metaphor for the kind of see-no-evil approach to Covid-19 that Flowers, and several other lawyers arguing against policies from President Joe Biden’s administration, would impose on the nation. Flowers would have the justices block one of Biden’s most significant efforts to halt a potentially deadly disease that, as Justice Stephen Breyer noted multiple times during Friday’s arguments, is infecting about three-quarters of a million Americans every day this week.

And yet, if Friday’s argument in National Federation of Independent Business v. Department of Labor is any sign, there will almost certainly be at least five votes on the Supreme Court to block the workplace Covid rule, which applies to employers with 100 or more employees.

Meanwhile, in separate case Biden v. Missouri, the Court considered a rule requiring health providers that accept Medicare and Medicaid funds to be vaccinated. This oral argument was less of a bloodbath for the government, and it seems possible that this more limited rule for health providers will be upheld.

But the oral argument in the first case, NFIB, suggests that the Court’s 6-3 conservative majority is inclined to hand down a very broad decision — one that won’t simply hobble many of the Biden administration’s efforts to quell a pandemic that has killed nearly 830,000 Americans, but that could also fundamentally rework the balance of power between elected federal officials and an unelected judiciary.

Both the NFIB case and the Missouri case involve very broadly worded laws, enacted by Congress, which give federal agencies sweeping authority to protect the health and safety of workers or Medicare patients. But all six of the Court’s Republican appointees appeared uncomfortable with letting these agencies — and especially the federal Occupational Safety and Health Administration (OSHA) — fully exercise the power Congress has given them.

Multiple justices appeared eager to impose new restrictions on Congress’s ability to delegate authority to federal agencies. Indeed, the Court could easily give itself a sweeping new power to veto agency regulations that a majority of the justices disapprove of.

If the Court does wind up drastically shrinking the federal government’s authority, that won’t exactly be a surprise. The Court’s been signaling that it is eager to transfer power from federal agencies to the judiciary since shortly after then-President Donald Trump replaced the relatively moderate Justice Anthony Kennedy with hardline conservative Justice Brett Kavanaugh.

But, while the Court has foreshadowed the most likely result in the NFIB case for quite a while, that does not mean that a decision striking down OSHA’s vaccinate-or-test rule would be any less profound. NFIB is likely to be a turning point in the right-wing Roberts Court’s relationship with the elected branches — and it could permanently disable the federal government’s ability to address crises like the Covid-19 pandemic in the future.

As mentioned above, Congress enacted several provisions of law that give certain federal agencies broad authority to protect the public health. The Occupational Safety and Health Act of 1970 (OSH Act) permits OSHA to issue binding rules that provide “medical criteria which will assure insofar as practicable that no employee will suffer diminished health, functional capacity, or life expectancy as a result of his work experience.”

Typically, OSHA must follow a slow process to do so, but a separate provision allows it to issue an “emergency temporary standard” if the agency determines that “employees are exposed to grave danger from exposure to substances or agents determined to be toxic or physically harmful,” and that such a standard is “necessary to protect employees from such danger.”

Meanwhile, a separate statute provides that health providers who accept Medicare or Medicaid funds are bound by rules that the secretary of Health and Human Services “finds necessary in the interest of the health and safety of individuals who are furnished services in the institution.”

These kinds of legislative delegations of policymaking authority to agencies are very common, both in the United States and in other modern democracies. As the Court explained in Mistretta v. United States (1989), “in our increasingly complex society, replete with ever changing and more technical problems, Congress simply cannot do its job absent an ability to delegate power under broad general directives.”

Although the plaintiffs in both cases argued that neither statute’s text authorizes the particular vaccination rules implemented by OSHA and the secretary, the argument in NFIB focused far less on the proper way to parse the OSH Act, and much more on whether Congress is even permitted to give such sweeping authority to a federal agency.

And the Court’s conservative majority seemed to agree it isn’t permitted to. Several justices, for example, brought up the “Major Questions Doctrine,” a judicially created doctrine that appears in no statute and that is mentioned nowhere in the Constitution, but which the Court sometimes uses to justify striking down particularly ambitious regulations promulgated by federal agencies.

Under it, the Court has told Congress to “speak clearly if it wishes to assign to an agency decisions of vast ‘economic and political significance,’” in a principle laid out in Utility Air Regulatory Group v. EPA (2014). As Justice Elena Kagan noted, this doctrine has historically been used to help the Court understand statutes that it deems to be ambiguous or vague.

But it now appears likely that the Court will expand this Major Questions Doctrine considerably, holding that it limits Congress’s power to delegate broad swaths of authority to a federal agency — even if Congress does so unambiguously.

Chief Justice John Roberts, for example, implied that a federal agency’s power to respond to Covid-19 might be quite limited indeed unless Congress specifically authorized that agency to deal with a pandemic. Though Roberts seemed to concede that the OSH Act’s text gives a great deal of authority to the agency, he noted that that law is more than 50 years old, before quipping that when Congress enacted the OSH Act, “I don’t think it had Covid in mind.”

Justice Brett Kavanaugh made a similar argument, pointing to a speech President George W. Bush gave in 2005, which predicted the emergence of a deadly global pandemic. And yet, Kavanaugh noted, Congress did not pass a new law addressing Bush’s concerns. The implication of Kavanaugh’s remarks was that pre-2005 laws, such as the OSH Act, are insufficient to justify OSHA’s actions.

Justice Amy Coney Barrett, meanwhile, suggested that she might support a vaccination rule that targets workplaces where there is an especially high risk that workers will be infected by Covid, such as a meatpacking plant or a dental office, but she also suggested that OSHA’s rule is too broad. The “problem here is its scope,” she said of OSHA’s rule. And she suggested that OSHA would have to perform a “more targeted industry by industry analysis” if it wishes to encourage vaccination in individual workplaces.

Although Roberts, Kavanaugh, and Barrett are all extraordinarily conservative justices, they represent the middle of the current Court, with its six Republican appointees. So if none of these three justices are inclined to uphold the OSHA rule, it’s almost impossible to imagine that the rule will survive.

Several justices, it’s worth noting, also suggested that OSHA’s vaccination rule is suspect because it is unprecedented — pointing out that OSHA has not historically imposed vaccination requirements.

But there are two very good responses to this concern, both of which were made by the Justice Department lawyers tasked with defending the two vaccination rules. The first is that the United States typically promotes vaccination by requiring vaccines for schoolchildren and for immigrants. That means that by the time an adult enters the US workforce, they have typically already been vaccinated against an array of diseases.

But Covid-19 emerged in 2019, and the vaccines only became widely available in 2021. So most workers did not enter the workforce with the same protection against Covid-19 that they have against, say, diphtheria.

The second problem with the argument that OSHA’s rule is invalid because it is unprecedented is that it also is a response to an unprecedented crisis. According to the Biden administration, Covid-19 is the deadliest disease in American history. It is certainly the worst public health crisis since the great influenza pandemic of 1918.

But, regardless of whether the OSHA rule may be wise, the Court appears likely to strike it down anyway.

The vaccination mandate for health workers could survive

That said, it appears after the argument in the Missouri case that the rule targeting health providers could survive. Barrett’s question about vaccine mandates which target specific industries, for example, suggests that her vote is in play in the Missouri case.

Similarly, Chief Justice Roberts noted that the rule for health providers is different from the OSHA rule in that it only applies to hospitals and other institutions that accept federal funding. It’s one thing, he seemed to suggest, for the government to command broad swaths of employers to do something, and another thing entirely for the government to effectively pay those employers to encourage vaccination.

Kavanaugh also had some difficult questions for Jesus Osete, the lawyer for the state of Missouri who argued against the health provider’s rule. Among other things, Kavanaugh noted that major health employers and health-related professional organizations generally support vaccination requirements. He also asked why a vaccination requirement is different in any legally significant way from other requirements Medicare and Medicaid impose on health providers, such as rules requiring them to wear gloves and wash their hands, in order to arrest the spread of communicable disease.

So the Court could potentially hand down split decisions in NFIB and Missouri, striking down the OSHA rule and upholding the health providers’ rule. A majority of the justices appeared more comfortable with the limited power the Biden administration exercised in the Missouri case than they were with the broader power it exercised in NFIB.

That may be a comfort to anyone who doesn’t want to catch Covid from their doctor, but it should not comfort anyone who believes that unelected judges should not have an unrestricted veto power over federal policy. The bottom line remains that Congress wrote expansive language when it passed the OSH Act, and OSHA relied on its expertise when it handed down a broad vaccination-or-test rule.

But neither the will of Congress nor the considered judgment of an expert agency appear to matter when five justices oppose a rule.