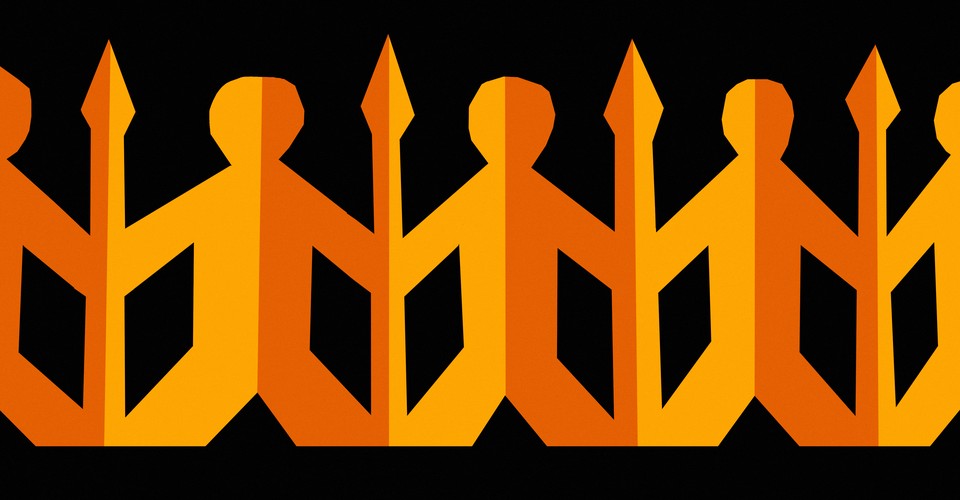 By now, even people who differ on nearly all issues seem to agree on at least one thing: American politics has become riven by tribal conflict. Tucker Carlson claims that “schools are creating tribalism in our kids.” Former President Barack Obama has warned that we risk “turning away from democratic principles in favor of tribalism and ‘might makes right.’” As the journalist George Packer, now of The Atlantic, once summarized the problem, “American politics today requires a word as primal as ‘tribe’ to get at the blind allegiances and huge passions of partisan affiliation. Tribes demand loyalty, and in return they confer the security of belonging. They’re badges of identity, not of thought.” The underlying psychology of “us and them” appears grounded in deep-rooted human tendencies to carve the world into groups and discriminate in favor of one’s own.

But although the notion that group solidarity leads inevitably to prejudice, animosity, and conflict is common, it is also incorrect and potentially dangerous.

Humans do seem to possess the innate capacity to identify with members of their own groups. People in every culture share the same propensity to form coalitions. This tendency is what the anthropologist Donald Brown calls a “human universal.” But it does not lead inexorably toward intergroup conflict. “Groupishness”—a term some researchers use to describe humans’ tendency to identify with social groups—can be the source of a much wider repertoire of actions, including cooperation, altruism, embracing diversity, and helping people radically different from ourselves.

Read: The threat of tribalism

In our new book, the two of us argue that, to explain collective behavior, researchers and commentators must distinguish between two key concepts: how strongly members identify with their group and its norms. Some members of the same group, for example, often feel a stronger sense of connection to the collective than others. Holiday Catholics are less committed than worshippers who attend every Mass. Zealous sports fans attend every home game and despise fickle supporters who pay attention only when their team makes the playoffs.

Members who strongly identify with a group generally conform more to its norms. But those norms vary dramatically. For every hate group, another group, such as the Red Cross or Doctors Without Borders, exists that is committed to helping others. And the more deeply members identify with the latter, the more likely they are to help people different from themselves—even at significant personal cost. Recognizing that collective norms can be either positive or negative is a key to understanding why and when tribalism occurs. It also suggests how different groups can find common ground.

When people use the term tribalism, they are usually aiming to capture a toxic dynamic in collective life, such as the one that characterizes much of contemporary American politics. But what happens between groups is often both a symptom and a reinforcer of unhealthy patterns within individual groups as well. Such patterns include the suppression of dissenting voices and a cult mentality in which members seek only to affirm one another’s worldview.

These characteristics describe how people can behave in groups, but they do not always apply. Indeed, in most cases, they do not. If you think about the many groups in your life, such as your workplace or your daughter’s soccer team, how many of them are at war with a sinister outgroup and try to suppress intergroup contact or internal dissent? Neither of us belongs to many, if any, groups that fit this description.

When humans identify with a group, we are motivated to pursue the group’s interests and goals. But while that feeling provides the fuel for collective action, group norms set the direction, determining what forms those actions take. In some experiments, psychology researchers have sought to manipulate whether people believe that their own group tries to treat outsiders fairly. Participants who are led to believe that their group normalizes fairness engage in less in-group favoritism than do people who think that their group has a discriminatory norm.

Rather than adopting discriminatory norms, real-life groups can and often do embrace norms of tolerance, acceptance, and inclusion. In a recent experiment, social psychologists questioned Italian high schoolers to discern which of their classmates, in the students’ view, best represented the group norm. Students who believed that their most prototypical classmate would take action to support immigrants expressed greater willingness to organize an event for World Refugee Day or attend a pro-immigrant demonstration.

Strikingly, the influence of the quintessential group member was greatest among students who identified strongly with their group. These were the people who agreed with statements such as “I often think about the fact I am a member of this class” and “I have a lot in common with other classmates.” The two of us are immigrants, and these findings give us hope. As the researchers put it, “Ingroup prototypes can have a key role in mobilizing advantaged group members in pursuit of a more equal society.”

The power of group norms has long been recognized in other domains. For example, young people’s drug and alcohol use or risky sexual behavior is heavily influenced by what they believe their peers do. This insight has led to promising interventions: Learning that others in your group drink less alcohol than you do can persuade you to cut back on your own excessive consumption. Many students overestimate how much their peers drink. In one study, university freshmen who received accurate information about drinking behavior by students of their own gender reported imbibing about 25 percent fewer drinks a week five months later.

Sohad Murrar and her colleagues at the University of Wisconsin at Madison recently applied the same idea to intergroup relations. In recent years, universities and other organizations have invested heavily in training in which instructors extol the benefits of diversity and urge participants to be mindful of their own implicit biases. But those initiatives have a mixed record. Murrar’s team found that drawing people’s attention to social norms could produce much better results.

For example, the researchers showed students five-minute videos suggesting that most peers at their university support diversity and try to behave in an inclusive manner. Almost immediately, attitudes toward outgroups and appreciation for diversity improved among students from non-marginalized groups. Most people want to fit in, and the promotion of inclusive social norms unlocked their desire to be good group members. This intervention also had a profound impact on students from historically marginalized groups, who reported that their peers were behaving more inclusively. They also experienced less anxiety, greater feelings of belonging, and even noted better physical health.

Of course, universities are distinct places. In a broader society, the divides between groups are far deeper than on campus.  Yet most humans define themselves in multiple ways. People of different races, political parties, or religious beliefs can share identities professionally, as sports fans, or as citizens. All of these identities are alternative ways of perceiving ourselves and our social worlds, and all are opportunities for communality and solidarity. When Martin Luther King Jr. urged the United States to “live out the true meaning of its creed,” he was calling for new norms of racial equality that were nonetheless grounded in the bedrock of American national identity.

Some identities cut across sectarian lines. Following the invasion and then defeat of ISIS in northern Iraq, the Christian and Muslim communities living there were left deeply divided. But they had something in common: a passion for soccer. In an extraordinary recent experiment, the political scientist Salma Mousa recruited amateur Christian soccer teams to join a new league. She arranged for half of the teams to remain all Christian, while the other half were joined by Muslim players. Playing together for a season with Muslim teammates made the Christian players express more inclusive attitudes. Compared with those on homogenous teams, the Christians on religously mixed teams were more prepared to train with Muslims in the future, vote for a Muslim player to win a prize, and sign up for a similar cross-religion experience the next season. The benefits appeared to be particularly pronounced for players on winning teams.

All of this contradicts commonly held notions about the tribal nature of group psychology. What many people call tribalism is not inevitable; rather, it’s a function of group norms. But the constant invocation of tribalism may create a self-fulfilling prophecy; people come to distrust other groups and falsely believe they need to discriminate against outsiders or suppress dissenters to maintain their status within their own group.

Understanding how group identities combine with norms to shape human behavior also empowers people—and especially leaders—to focus more on cultivating healthy norms within their group. Rather than assuming that groups will slide into hostility and insularity, humans should hold ourselves to higher standards.