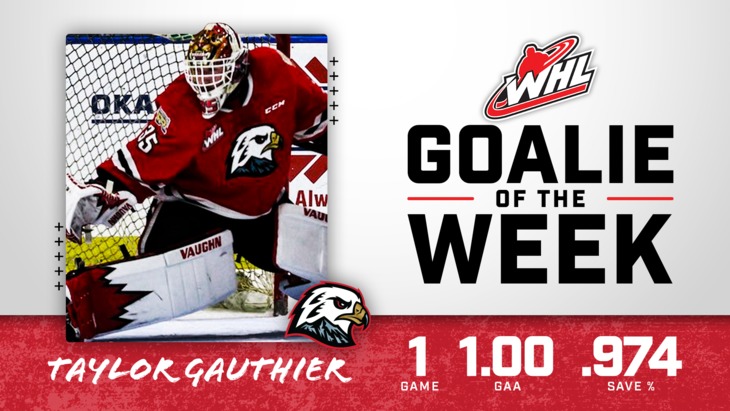 Gauthier turned aside 38 shots in his Portland debut Saturday, January 8, helping the Winterhawks post a 3-1 road victory against the Kelowna Rockets.

The product of Calgary, Alta. was acquired by Portland from the Prince George Cougars December 27, 2021. He has made 36 or more saves in each of his last four appearances with the Cougars and Winterhawks, posting a 4-0-0-0 record in the process.

The 20-year-old was originally selected by Prince George with the 10th overall pick in the 2016 WHL Draft. In 167 career WHL appearances with the Cougars and Winterhawks, he has accrued a 54-87-8-8 record, to go along with a 3.17 goals-against average, .906 save percentage and six shutouts.

Gauthier and the Portland Winterhawks are slated to begin a three-game weekend Friday, January 14 when they visit the Seattle Thunderbirds (7:05 p.m. PT, Accesso Showare Center).

About the Western Hockey League
Regarded as the world’s finest development league for junior hockey players, the Western Hockey League (WHL) head office is based in Calgary, Alberta. The WHL consists of 22 member Clubs with 17 located in Western Canada and five in the U.S. Pacific Northwest. A member of the Canadian Hockey League, the WHL has been a leading supplier of talent for the National Hockey League for over 50 years. The WHL is also the leading provider of hockey scholarships with over 375 graduates each year receiving WHL Scholarships to pursue a post-secondary education of their choice. Each season, WHL players also form the nucleus of Canada’s National Junior Hockey Team.